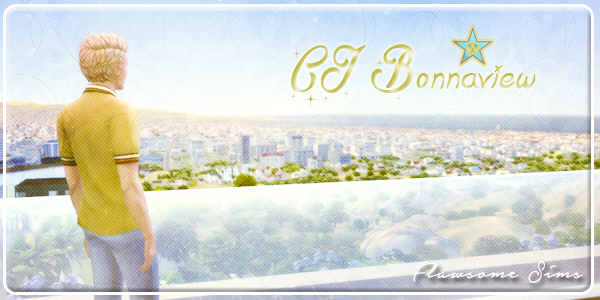 So, we were tasked this month to create a new character and give them a backstory while stepping out of our comfort zone. I created CJ Bonnaview as the opposite of me – someone who loves attention, is attractive, and wants to be in the spotlight! I used no CC, which was a struggle for me lol and I have all of the packs except for the Moschino Stuff pack. I really hope this is up to standard because I had no idea what to do for this lol

I also filled out the PSD character profile that Lisabee posted but it wouldn’t save my answers so I just screenshotted them and uploaded to an album on Imgur which you can see here. I suck at character building and profiles but I did spend an hour filling it out so I wanted to share it 😛

Meet CJ Bonnaview, a thirty-year-old man living in Del Sol Valley with his parents, Joon and Liam Bonnaview. He’s a pretty self-absorbed sim with snobbish tendencies that’s far too up his own behind. In his eyes, he’s god’s gift to the earth and he won’t hesitate to let you know it!

His father, Liam, grew up poor before rising the fame through his music. Now, he’s a five-star celebrity and world-famous musician. His mother, Joon, is just as self-absorbed as her son, living for the fame and the fortune her husband provides.

Since he was a small child, CJ was pampered and praised, always told that he was the very best at everything he did, even when he wasn’t. He only needed to say what he wanted and it was presented to him atop a golden platter. Because of this, he’s full of entitlement, expecting the world to bend to his wills and wishes.

He wasn’t always a lost cause, however. You see, the most important person in his life has always been his grandfather, Charles. The man taught him to be kind and polite, to be selfless and love his fellow sim, and these lessons actually stuck. At least they did until the day he lost his grandfather. He was at the impressionable age of ten, and this loss struck him hard. He stopped opening up to others and lost all empathy for anyone other than himself.

His grandfather taught him one last lesson with his passing – the only sim that won’t leave you is yourself. He promised himself that day to never get close to another sim, and so far, he’s stuck to that promise.

You see, his father realized too late what kind of monster his son was becoming. He’s tried for years to set his son on the right path, attempting to teach him empathy and kindness, but CJ had already been far too spoiled to take these lessons to heart. Because of this, the pair often butt heads, ending in flaring tempers and hurtful words slung around carelessly.

CJ has had the same desire for most of his life – he wants to be famous, a household name that everyone knows, and he wants the wealth to prove it. While the path he wants to take has changed many times, the destination has remained the same. When he was ten, he wanted to be an astronaut famous for finding an unknown planet. At age twenty, he wanted to be a professional basketball player famous for his shots that never miss. And now, at age thirty, he wants to be an actor famous for bringing charisma and beauty to every role he plays.

There’s only one problem, and it’s a big one.

His father has had enough of his entitlement. “I’m tired of your entitlement!” Liam yells angrily. “You’re going to learn what it means to struggle and work hard for what you have!”

“What are you gonna do, kick me out?” CJ scoffed.

“Actually, that’s a great idea!” Liam’s angry expression morphed to one of approval. “Pack up a bag, son, you’re leaving the Bonnaview Estate!”

CJ tried to charm his way out of the situation, as he always did when someone became fed up with his ways, but his father is immune to the charm and doesn’t budge on his stance. When that fails miserably, he pleads with his mother to talk some sense into her husband, but she merely starts to sob and cry about how her precious baby was being taken from her. After stuffing as many of his designer clothes into one duffel bag as he could possibly fit, his father handed him a piece of paper with an address on it, a key, and one thousand simoleons. After all, Liam Bonnaview may be strict on his son, but he could never simply put him out on the street without a simoleon to his name. No, even in his anger, he purchased his son a cheap house in Mirage Park.

CJ didn’t see this as an act of kindness, however. No, he saw this as pure torture and he was convinced that his father hated him. He’s always been one for dramatics.

As he stared at his new home, rain beginning to fall from the cloudy sky, for the first time in his life he felt afraid and wished desperately for his grandfather.