On her way home from work, Blaise stopped by another of the free boxes that littered her neighborhood, hoping to find another snowglobe to add to her collection. While she didn’t find a new snowglobe, she did find something quite… strange.

A single red velvet cupcake sitting between various footprints in the snow.

‘Sims are feckin’ weird,’ she concluded before proceeding to drop down into an empty patch of snow, leaving her mark in the form of a snow angel. It was something the kids loved to do back at the orphanage – they would often host competitions to see who could make the neatest one, the messiest one while still looking like an angel, even the biggest and tallest. It wasn’t much, but it occupied their time for longer than you would think and it made them happy.

The den mothers were happy to see the kids happy, at least until they came inside, shaking like dogs and sending snow flying everywhere in the entryway. 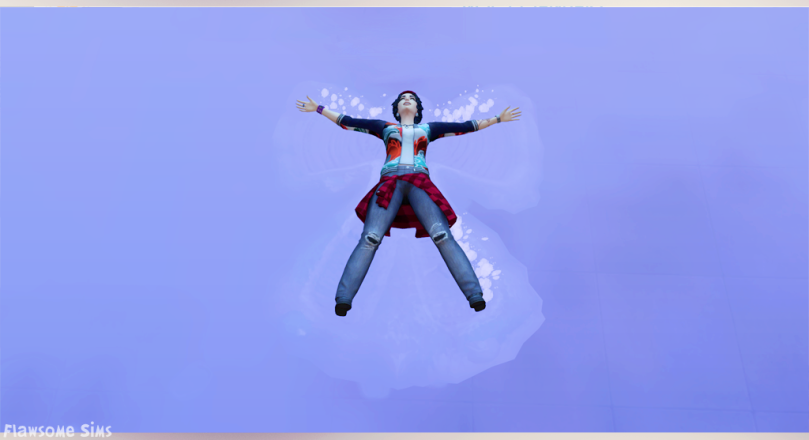 Upon returning to her apartment, she spies Heriberto lingering in the hallway. His eyes light up when they land on her. “You’re home!”

Blaise was suddenly reminded of a puppy upon its owners return home. “Hey. Were you… waiting for me?”

“Of course!” He smiled brightly, taking her hands into his own. “I have some time before I must be at work. Shall we spend it together?”

She hesitated before finally nodding and allowing the man into the apartment. They sat on the sofa and he asked her about her night at work while slipping in compliment after compliment. After a while, she got tired of listening to his voice and pulled him into a kiss to silence him.

Her nose scrunched up as she pulled away from him, clearing her throat. Honestly, he annoys her so much with how lovey-dovey he is and how clingy he is, but this is her first relationship and she wondered if it was normal for couples to act in such a way. Maybe she’s just broken?

“Here, take this.” Blaise pulled a key from her pocket and held it out to him. ‘If he’s going to be sticking to me like glue, at least this way he won’t annoy me by making me come to the door every time he knocks,’ His face lit up in surprise and happiness. “You… trust me with your spare key?”

“Uh… sure,” Trust had never been apart of it because Blaise McLoughlin trusts no one but herself. And occasionally Astra.

“Oh, my love!” He took the key, dropping it into his pocket before throwing his arms around her, squeezing her with a surprisingly high amount of strength.

She grunted, her hands twitching as her instincts tried to kick in, itching to shove him away. “You’re going to be late for work,”

Heriberto frowned. “I don’t want to leave you, but I must. Try not to be too lonely without me, my love.” His lips pressed against her cheek and she rolled her eyes, watching him leave the apartment.

With a sigh, she headed into the kitchen to make herself some food. Seeing Astra atop the fridge, she sends him a sharp look.

“Will you get down from there? You’re going to get fur everywhere.”

He made a noise similar to a huff before doing as she asked. Grabbing a pot from beneath the sink, she filled it with water and turned the stove on to get the water boiling. A trick she had looked from the butler living in the Villareal home was to wait for the water to boil before adding the noodles to avoid having them get soggy or too soft.

She went to add some pepper for flavor, but the shaker fell from her fingers, making her wince knowing how bad it would taste now.

Astra made a strangled noise and she knew he was laughing at her. If he could speak, she was positive he would say something along the lines of, “And that would be karma!”

“Damn it,” she sighed, doing her best to pick out the heap of pepper. While she did manage to get most of it, there was still quite a bit she had missed.

The front door creaked open and her eyes narrowed, reaching for the pocket knife she kept on her at all times.

“I’m home!” Heriberto cried happily as he burst into the apartment, rounding the corner. “Oh, you made food! It smells heavenly~”

Blaise stares at him blankly, having an internal debate with herself over whether or not she should just stab him now and get it over with. It had barely been ten minutes, why was he back?

He grabbed a plateful of mac n cheese before sitting at the table, not hesitating to devour the food. Astra, sending his master’s annoyance, hopped up onto the table in front of him. He tried to pet the creature, who arched his back and hissed – a warning to keep away.

Heriberto frowned. “I don’t think your cat likes me very much…”

‘I’m starting to feel the same,’ she thought with an annoyed twitch.

“Perhaps he’s jealous of our love!”

Love? What this what love consisted of? She didn’t know, but she certainly didn’t like it.