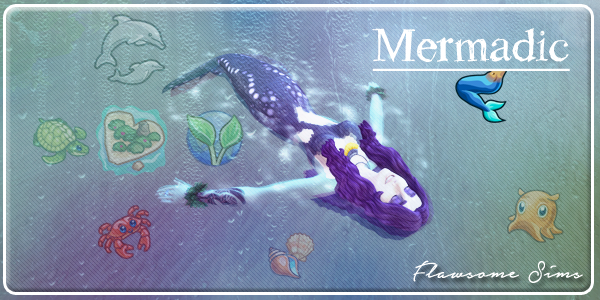 Hey there ^~^/ I wanted to do a playthrough for Island Adventure, following the pack in its entirety – with the career, mermaids, conservation, etc.

Betty Barlow is a teenage mermaid, born to Colin Barlow and Malia Sultani. Malia was also a mermaid, but she passed away while giving birth to her daughter. Because of this, Colin decided to pack up and leave the islands of Sulani, choosing to raise his daughter with his parents in Willow Creek. Now that Berry is a teenager and her powers are rising, the two of them have returned to the islands, unaware of the ancient prophecy that has begun to unravel. You see, the islands are being threatened by an ancient evil and Betty must bond with her ancestors to learn to control her abilities and help restore the peace that had been stolen from Sulani. However, her ancestors won’t just welcome her back with open arms. No, she must first prove herself to them.

Betty Barlow has always loved the ocean and its creatures, and she has a deep-seeded appreciation for mother nature. Because of this, she wants only to give back to the world around her in any way she can. After returning to her birthplace of Sulani and learning of  the role she must place, she happily accepts the responsibility thrust upon her and dives straight in to help the islands recover. She sees only the light in the world and loves to help others. She also hopes to learn more about her mother from the locals.

Colin met his wife Malia when he took a vacation to Sulani as a college student. He had been swimming around the island when his leg got caught in some kelp, dragging him beneath the water. The more he struggled, the tighter it became and, just when he was losing hope, Malia came gliding through the water with her tail splashing behind her. From that moment, he was in love. They got married and he moved to the islands where the pair settled down and started a life together. When his wife got pregnant, the pair were elated, but she died during complications during the birth. Everything reminded him of her, so he packed his bags and returned to Willow Creek with his daughter. Now, the pair have returned so Betty can reclaim her heritage.